One of the unexpected surprises that came with upgrading to a new Macbook Pro Retina 15″ from an older MacBook Pro was Apple’s inexplicable deletion of the audio input (mic) 3.5mm jack. I use a regularly use a gaming headset with a boom mic that was now rendered completely useless, because I was no longer able to plug in the mic. I love it that Apple’s hardware is on the cutting edge, but sometimes they do things like this that just don’t make sense for the average user.

I did some searching around, and discovered that Apple changed the standard dual input/output 3.5mm jacks for a single combined TRRS 3.5mm jack with 3 contacts – the same one they use for the iPod, iPhone, and iPad. I guess it makes sense for Apple to standardize everything so you can use their headphones everywhere, but it caught me offguard and really frustrated me that I would have to buy something extra just to continue using my headset.

I did some searching and originally purchased this Headset Buddy cable from Amazon. It’s $15.95(!) and has branding from the 1980’s. I cringed and made the purchase thinking it would be worth it if it solved my problem. When it arrived, it was clear that the price of the cable is about 3x what it should be. The cable is flimsy and cheap, and didn’t even work at all. I promptly returned it. The customer reviews are mixed, but don’t gamble on it.

That cable purchase has soured my view on the TRRS splitters for a while, so I opted for a USB audio adapter to 3.5mm input/output jacks instead. It was a little cheaper at $10.95 and worked great, but came with a huge downside: It uses one of only TWO total USB ports on your MacBook Pro – a precious resource that I was already using (and thus had to also use a USB hub). Another downside here is that you have to explicitly switch to USB audio using the Sound preference pane, which can be annoying at times.

The best working solution (and also the cheapest) I found is this TRRS audio cable from Monoprice for about $5. When it came in the mail, I originally thought I ordered the wrong cable, because the configuration is weird. Instead of a typical “Y” configuration off the male jack, it instead splits off from the 3.5mm audio input female jack into another 3.5mm audio output female jack. Make sure you look at all the product images to see what I mean. 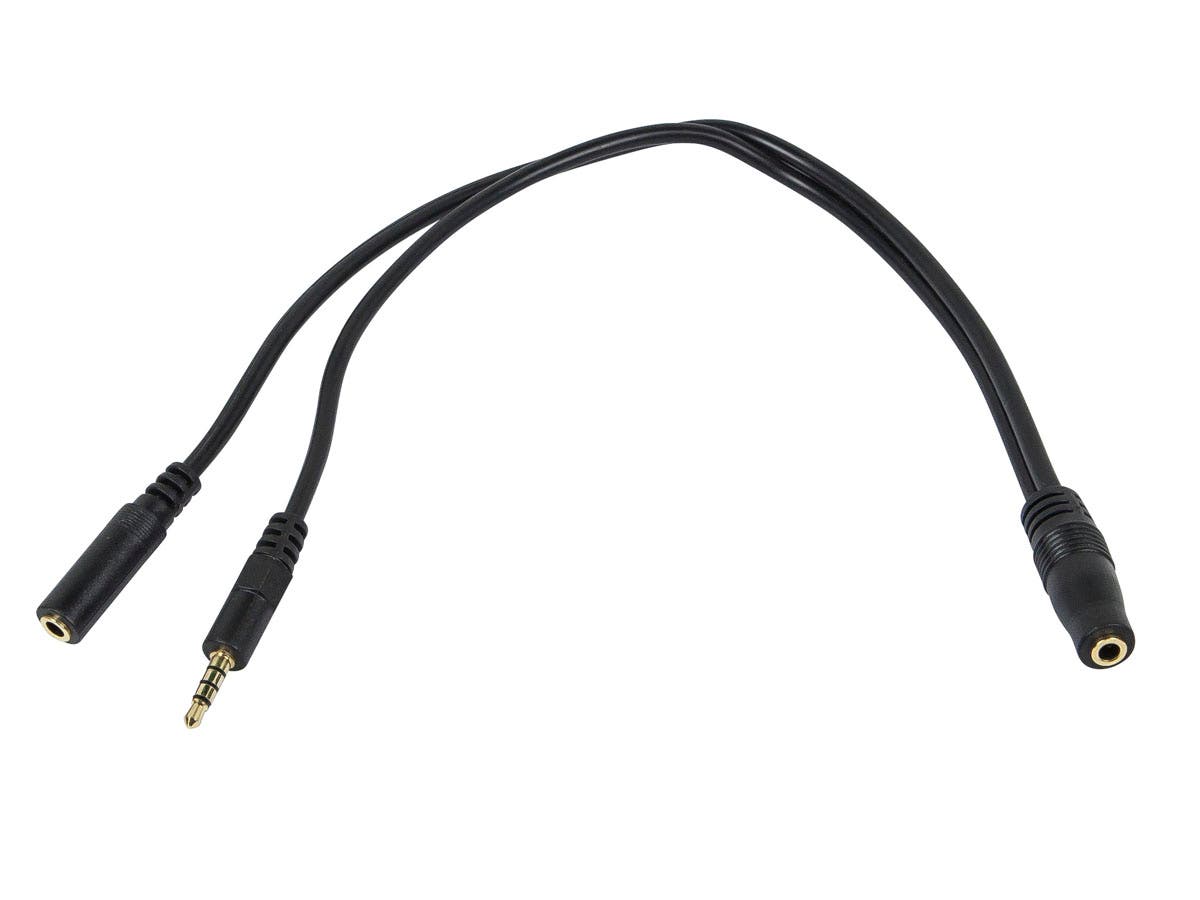 The cable works well and feels very durable, even if it does looks like the wrong type of cable (Monoprice, if you’re listening – please fix this. It works, but it just looks weird with the “Y” coming off the female 3.5mm input jack).

Hopefully my misadventures in trying to solve this problem that Apple itself doesn’t even have a cable for will help you not have to do all this experimentation yourself. I feel like this should have been way easier than it was to find a cable that works on newer Macbook Pros, but apparently marketing lags a bit behind for 3rd party accessories like this (all these cables are marketed as iPod/iPhone/iPad cables, which have the same TRRS 3.5mm jack). In another year or two, I doubt this will be a problem at all, but just incase it still is – you can always find this blog post :).

UPDATE (March 13, 2017): At some point after about a year and a half, the TRRS cable I recommend in this article from Monoprice stopped working. I ended up just buying and using a new USB gaming headset instead. I know that’s not the conclusion you want to hear, but it is the unfortunate truth. In my particular setup with an external monitor with built-in USB hub it is not too much of an issue since it doesn’t use an extra USB port that way, but your mileage (and USB port utilization) may vary.